Analog control is the oldest and simplest type of regulation. It is mainly used for small systems together with a manual regulator or a daylight sensor for automatic regulation.

1-10V rotary controller controlls max. 50 luminaires, switches max. 10 single-source or 5 double-source light fittings or 5 pcs 4x18W luminaires. The number of luminaires to switch can be raised by a contactor. 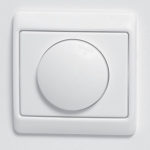 Necessary to specify whether for T5 or T8

MIMO 2 sensor (1-10V). Automatic regulation which preserves a constant lighting level that can be adjusted from c.200 to 600 lx. It can regulate up to 15 ballasts (luminaires) 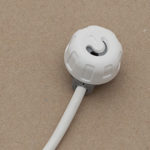 The DALI digital control is the a state-of-the-art type of regulation and control used in modern installations for integration of a system into intelligent building control.

(Digital Addressable Lighting Interface) offers new possibilities. The DALI is defined as a “Master-Slave” system where control modules communicate with each other, send commands to luminaires that receive them. The whole system is conceived for 64 components that can be represented not only luminaires, but also relay modules used for switching on/off something. These 64 components can be divided in up to 16 groups where the components do not have to be just in one group. It is also possible to set up to 16 scenes.

The luminaires are connected with a paired cable and all the setting is done only after the installation of the luminaires. It is therefore possible to change the arrangement of groups of luminaires any time afterwards. It also is possible the change the way of switching on from separate rows to separate “columns” or to control one luminaire separately and the rest separately. All of this can be done without changing the wiring system.

Control modules can be very simple – you can imagine a common button used for switching on / off a group of luminaires or creating a “scene”. A “scene” is a setting that has been saved to the memory and to which you can come back at any time.

You can create various scenes such as: a scene for common operation, a scene with dimmed light used for presentations or a scene with reference lighting only for the security guard.

A control module can also control a lighting system according to daylight or work as a receiver of a wireless controller.

The DALI system allows you to enter the system and change the configuration according to the current requirements. The DALI system can also be integrated into other systems such as EIB, LonWorks, and the like.

If you are interested in using DALI, we are ready to help you with a concrete application. Do not hesitate to contact us.

It is also possible to control a lighting system with a button.

The number of ballasts to control this way is theoreti- cally unlimited although a maximum of 20 ballasts is recom- mended in practice.

Control is done with neutral, but it is also possible to use the phase. The ballast does not have a memory which means that after being switched on, the luminaire always switches on 100%. Attention – the luminaires will switch on by themselves after a power failure even if they have been switched off with a button only. This can be avoided by adding a switch. An a non-synchronous situation can happen rarely (some luminaires are switched on and some switched off). You can synchronize the luminaires by switch- ing off the circuit-breaker.

Characteristics of „ECO and EXCEL“TRIDONIC ballasts :

Other versions of luminaires

• Made of STAINLESS STEEL